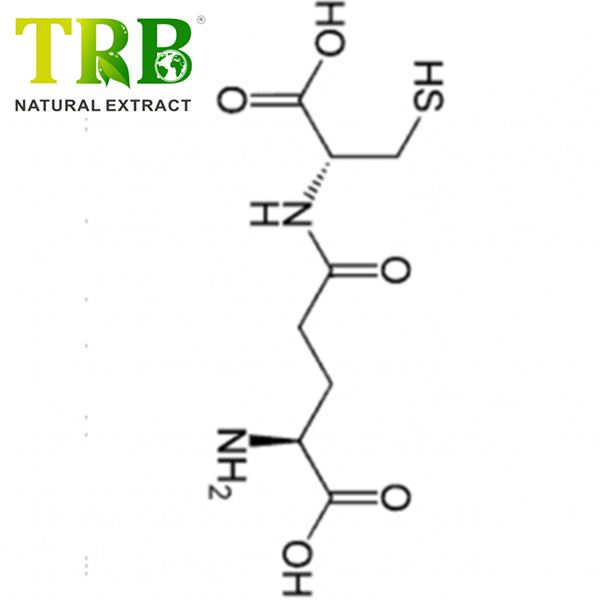 Gamma Glutamylcysteine is a white crystalline powder with the molecular formula C8H14N2O5S and it has a molecular weight of 250.27. The CAS number for this compound is 686-58-8.

Gamma Glutamylcysteine is a white crystalline powder with the molecular formula C8H14N2O5S and it has a molecular weight of 250.27. The CAS number for this compound is 686-58-8.

The molecule Gamma glutamylcysteine is the precursor to glutathione. It can enter cells and convert into more of this powerful antioxidant when inside by a second synthesis enzyme called glutathione synthetase. This may provide some relief from oxidative stress if it helps cells with an impaired GCL recover and re-gain normal function again in life’s constant battle against free radicals that damage all healthy tissues over time!

The intracellular concentration of gamma-glutamylcysteine (GGC) is generally low because it reacts with glycine to form glutathione. This process happens quickly, as GGC only has a half-life of 20 minutes when in the cytoplasm.

However, Oral and injected supplementation with glutathione is incapable of increasing cellular glutathione in humans. Circulating glutathione cannot enter cells intact and must be first broken down into its three amino acid components, glutamate, cysteine, and glycine. This large difference means that there’s an insurmountable concentration gradient between the extracellular and intracellular environments, which prohibits any extra-cellular incorporation. Gamma-glutamylcysteine may be a key player in transporting GSH across multicellular organisms.

Gamma-Glutamylcysteine is a compound that provides the cells with GGC, which they need to produce Glutathione. Other supplements like NAC or glutathione cannot do this at all.

How does GGC work? The mechanism is simple: it is able to increase glutathione levels quickly. Glutathione is an essential amino acid that performs many functions in the body and protects against toxins. Glutathione participates as a cofactor for one of three enzymes that convert leukotrienes to help alleviate asthma symptoms, assists in releasing toxic substances from cells so they can be excreted by bile into stool or urine, repairs DNA damage caused by free radicals with its antioxidant properties, replenishes glutamine after exercise improves immune function through the production of antibodies such as IgA (immunoglobulin A) which helps protect us from respiratory infection during the cold season when we are most susceptible to it—all this while playing key roles elsewhere like regulating metabolism!

Gamma-glutamylcysteine is proven to boost cellular glutathione levels within 90 minutes. Glutathione, the body’s primary defense against free radicals, has been known to help reduce oxidative stress from free radicals and support a variety of bodily functions including detoxification.

Gamma-glutamylcysteine is new to the supplement market, and there are no serious adverse effects reported yet. It should be generally safe taken according to your doctor’s advice.

Safety assessment of GGC sodium salt in rats has shown that orally administered (gavage) GGC was not acutely toxic at the limit single dosage of 2000 mg/kg, demonstrating no adverse effects following repeated daily doses over 90 days.